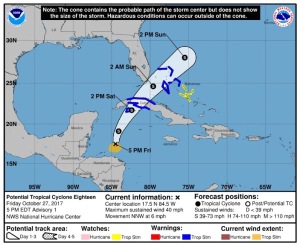 Okay, let’s not get ahead of ourselves. First, and foremost, Phillipe doesn’t even exist yet. Technically, all we have, right now, is a tropical disturbance that has the potential o become Tropical Cyclone Eighteen. Setting aside that we might be on number eighteen, which is crazy in and of itself, we do have the potential for a big, nasty storm on our hands. So, what is pending TC18 going to do?

First, the details. The storm is currently located at 19.6N 84.2W, moving N at 10 MPH, with a min pressure of 1005 mb and max sustained winds of 35 MPH. That’s 165 miles SSW of the Isle of Youth and 275 miles SSW of Havana. A Tropical Storm Arning has been issued for parts of Cuba and the NW Bahamas. There is no real defined center and it’s still very disorganized. The storm is beginning to accelerate ahead of a deep-layer trough over the US, which will both accelerate forward movement and turn the storm NW.

So, what will this storm do? Currently, I think it will dissipate before too long, likely in the next 72 hours. It will dump a lot of rain in Cuba and the Bahamas, and in Florida.

However, it could have a major impact in New England.

The storm and the cold front could join forces and produce a rapidly intense coastal storm that impacts the New England area. The NWS has issued wind and flood advisories for nearly all of New England. Will the storm be a nor’easter? No. The wind won’t be from the north east. So, while there’s no such thing as a sou’easter, that’s what it would be, in essence. This may well be the strongest October storm to ever hit New England. Sandy, if you recall, hit Jersey, not New England.

We will be keeping a watch out this weekend!

Published by the Modern Family Man

I'm a husband, father, foodie, cat lover and weather enthusiast... I care a lot about making the world a better place, protecting children, justice, politics, the environment, and especially my family. My personal goals include trying every style of hotdog served across America (I'm getting close), raising my two daughters to be great humans, and eating as much charcuterie as possible! View all posts by the Modern Family Man